The Bonnell Tavern has been a landmark in Clinton, NJ since it was established in 1767 by Lt. Colonel Abraham Bonnell.  It was operated as a tavern until 1870 and by 1770, had become the meeting and voting place for the northern section of the county.   In the latter part of 1775 political activities at the tavern became even more important when Charles Stewart returned from attending the Provincial Congress of New Jersey as delegate, called a meeting of local residents at the Bonnell Tavern, and organized a regiment of “minutemen”, the first of its kind in the this region of New Jersey.  This was the regiment which was ordered by the Provincial Congress on February 15, 1776 to march to New York under the command of Charles Stewart, by then a colonel.  These patriotic militiamen soon joined forces with Major General Charles Lee.1  Charles Stewart later was recruited by Washington to be his commisary general of the army, in charge of all purchases for the war effort.

Despite its current under-utilitzation, Bonnell's Tavern is  one of the most historically significant sites in New Jersey. During the Revolutionary War it was a recruiting station for militia and Continental army units and it was the headquarters and recruiting center of the first minuteman regiment in the region.

It was also the headquarters for the 2nd Hunterdon County Militia Regiment in which Abraham Bonnell served as a Lieutenant Colonel. The militia bill that was passed on June 3rd, 1775 triggered a meeting at the tavern on June 19th, of 1775, during which the officers of this regiment were elected, the first in the region.

The tavern and militia unit also played roles in some strategic decisions. Pittstown was an important center in the forage war during the British occupation of Philadelphia.  The Hunterdon militia helped General Washington decide to send the Continental Cavalry into winter quarters at nearby Pittstown because the horses could be protected by the 2nd Hunterdon regiment.  The 2nd Hunterdon regiment was thought to have been involved in gathering the boats from Easton to Trenton.  These boats were gathered to keep the British from gaining access to them and were possibly involved in the crossing of the Delaware.

New Jersey did not officially support the Revolution until July of 1776 so Abraham Bonnell's unit was formed illegally and he could have been arrested for treason. However, in July 1776 the new state government appointed him as the second-in-command of the New Jersey Brigade. During the war Abraham did serve in combat and commanded troops in the Battle of Millstone among others. His military career is not very well documented because he was a militia officer, not a Continental Army officer.

On a lighter note, Bonnell family documents state that among the most famous patrons of the Bonnell Tavern were Aaron Burr and his daugher.  They stayed at the Inn several times before he became the 3rd Vice President and prior to the famous duel with Alexander Hamilton in Weehawken, NJ.

Bonnell Tavern License:  Though the tavern was licensed as early as 1764, Abraham Bonnell received this license in 1768.   This beautifully written document is a clear indication of the wealth of the applicant.  Dated May 2nd, 1768. 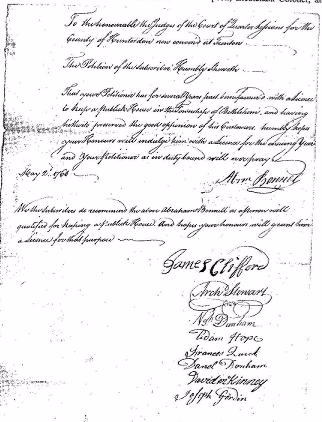 A Lucky Coin:  This English penny, dated 1738 and another one, dated 1737 were placed under the threshold of the Bonnell Tavern at the time of construction. They were discovered in the late 1950s 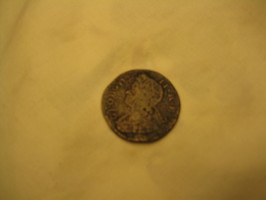